It’s quite unfortunate that taxes have been, more often than not, equated with death. The comparison brought such negative connotation that many people think taxes truly came from the pit of hell.

However, did you know that there’s a lesser known quote mentioned in Margaret Mitchell’s Gone With the Wind, and it goes, “Death, taxes and childbirth! There’s never any convenient time for any of them.”

Ahhh so taxes can also be like childbirth! Ask any mother and she’ll tell you that the pains of childbirth are forgotten as soon as she sees the face of her newborn. Now that’s a positive way of looking at taxes, don’t you think?

Being on the topic of childbirth and newborns, did you know that an increase in the population also increases the number of taxpayers? Ever wondered as to how many?

The data from NSO states that the population of the Philippines for 2010 is 92.34M.

Let’s look at the total registered taxpayers based on the BIR Annual Report from 2011, which is 18.96M. 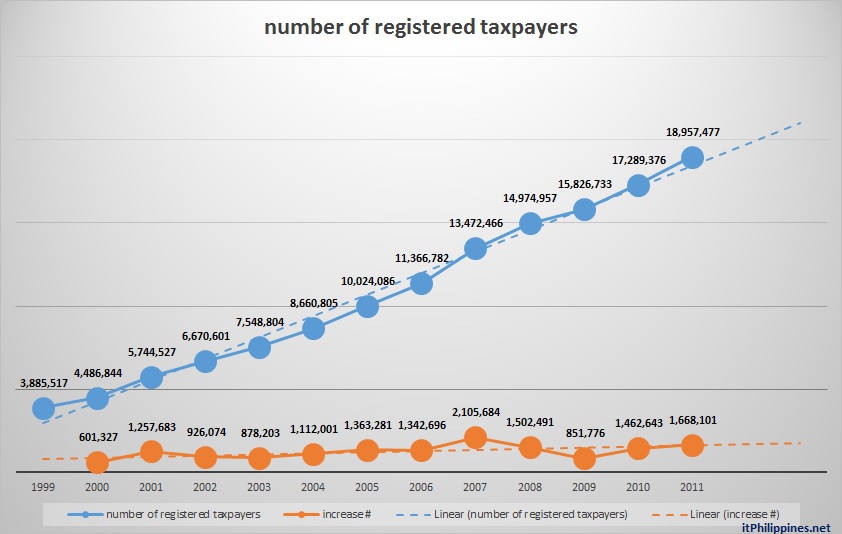 An average of 1.3M increase of registered taxpayers per year is likewise indicative in the BIR statistics above.

Both graphs leaned in upward direction which inferred the following by natural progression:

It’s hard to speculate from the 1.5M increase in population per year as to how many would be in the workforce or must pay taxes. But, what’s certain is for as long as the population increases, there will be an increase in TIN registrants.

So, if you happen to be one of the new additions to the country’s workforce, it would be important for you to know how to get your own TIN and the importance of having one. Stay tuned for more information.

Don’t hesitate to share your thoughts in the comments section.

Next in the pipeline: TIN Registration For Students Thing you should know when applying for a TIN!

One thought on “Tax Fact: Relationship of Population Growth and the Number of TIN Registrants”